I turned 35 this past November and I decided to fill my bucket a little. I have a dear friend from college that lives in Portland Oregon whom I rarely get to see. On kind of a whim I snagged some flight deals from Southwest and set up a birthday trip. Just me…no kids, no husbands, no adulting. Just a weekend with old friends to recharge my batteries a bit.

First up….I spotted the famous PDX carpet that has been highlighted by the likes of the Yarn Harlot and has inspired many an indie dyed yarn colorway. Apparently its an institution and I in true tourist fashion snagged a photo. 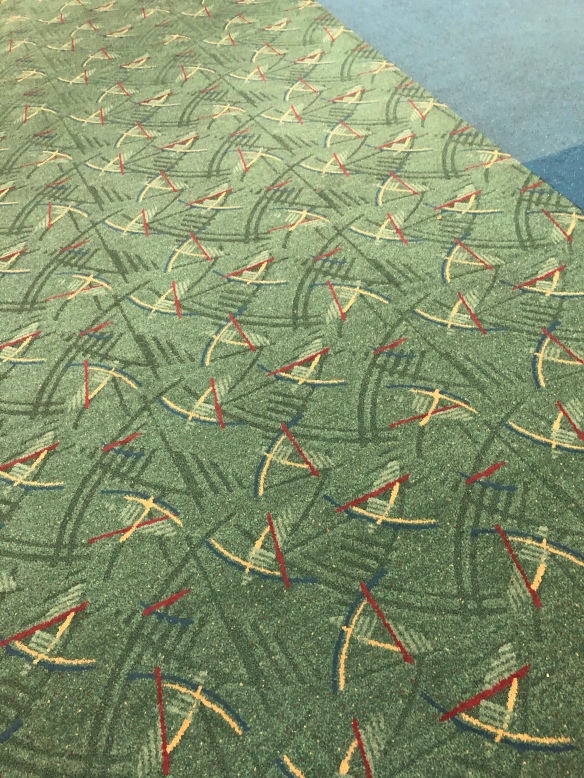 Right from the airport we grabbed some Cuban food for brunch and did some shopping in the little neighborhood by her house. I snagged some books from Powels, christmas presents for my kiddos and soaked up all the weird that is the Pacific Northwest. That night my friend threw me a personal birthday party in her gorgeous house. We had homemade fish tacos, wine and chocolate peanut butter cake!

The next morning I was served homemade quiche after I slept for a magnificent 10 hours of uninterrupted sleep. Did I mention my friend’s husband is a classically trained chef? I was in heaven….

After breakfast we did some more shopping and I picked up a new winter coat for PB and I and then my friend took me to a YARN STORE. The store was awesome and it deserves it’s own special post.

On Sunday night before I had to fly out we went out for ramen and Korean BBQ. I had Bibimbap with pulled porkand it was GLORIOUS. Then we met up with a local friend and went to a stand up comedy event that supported LGTBQ charities. We had wine at the show and laughed so hard we cried.

The morning of my flight the grey Oregon skies parted and sent me off with this glorious sunrise. I’m told that this kind of sunrise is rare this time of year so I felt extra special. 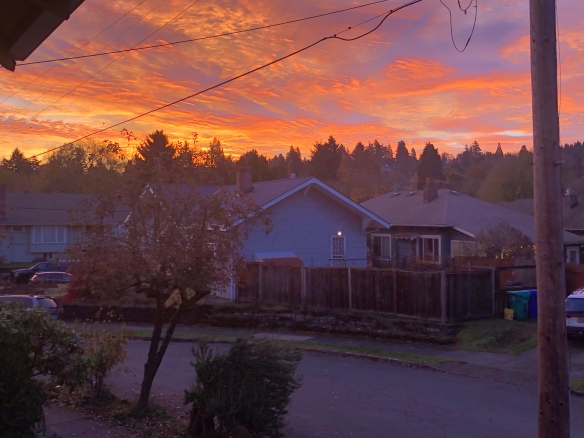 And I flew home to my hubby and babies….and an arctic blast. I did get a lot of knitting done while I was on the airplanes and while lounging around the house chatting with my friend. But I think I’ll share all that on separate posts. I was exhausted from all the coming and going but it was worth it. I may or may not be plotting my next trip already….

11 thoughts on “Filling My Bucket”