Y’all….I made a thing and it is done! My Worsted Boxy is off the blocking mats and ready for fall.

I realized as I was packing away my supplies from this project that I might have made an oops. I’m pretty sure I knit the body of this sweater on US7s instead of US 9s. Between that and the fact that I picked a pattern size to purposely have less positive ease I have probably four to five inches of positive ease instead of ten as called for in the pattern. And the sleeves hit me above the elbow instead of below as shown in the pattern. 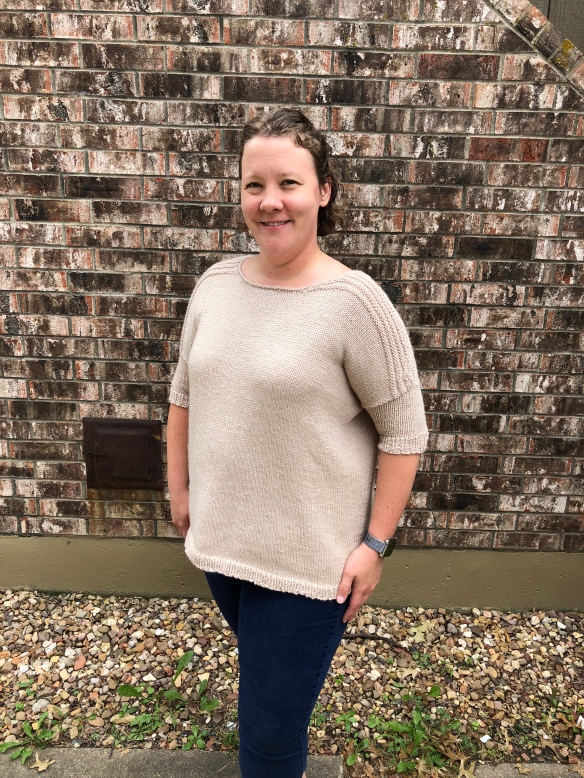 I am still happy with this project. The fabric I created is nice and dense enough that I don’t need a tank underneath. It’s definitely boxy shaped and I think hangs nicely on my frame. And I only had 70 grams of yarn left so I probably could not have made the next size up. I don’t know, maybe with the larger needles I would have not used as much yarn? I might go back and add another row of single crochets around the neckline. Simply to add more stability and make it look like a formal neckline.

P.s. the hem totally stopped rolling after blocking! I win!!!

Sound the trumpets because I have FINISHED THE KNITTING OF MY WORSTED BOXY!

I stayed up embarrassingly late last night just to finish the second sleeve. I’m going to need a second cup of coffee to make it to work but it was totally worth it! And I was watching “I Mom So Hard” on Amazon video and laughing until I cried and my husband asked if I was okay. If you are mom, seriously check it out! But trigger warning it does have strong language and adult humor. It might not be for everyone.

The arms of my sweater can often feel tight. So I picked up a few extra stitches and worked the instructions for the next size up in the pattern. It worked great because now the sleeves are snug but not bindingly tight.

Now I’m off to weave in my ends and get this ready for a blocking/bath this evening after dinner. Soon this sweater shall be mine!!

Over the weekend I applied the pattern written neck band to my Worsted Boxy. Guys…I hate it. Straight up white hot disgust. Take a look….

It looks sloppy and when I try it on, the weight of the sweater pulls ALL of the roll out of the collar so it’s just a big chuck of stockinette. And my tension got wonky in a couple of places and I may not have picked up in the cleanest fashion. It all just look Homemade instead of Handmade. 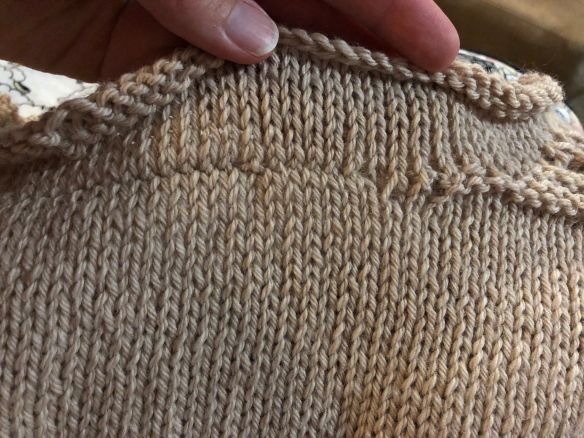 So I ripped it back and grabbed a crochet hook (that took me like 24 minutes to find) and added just a simple single crochet edge treatment. I have a few ends to snug up and weave it. But this feels MUCH better to my eyes. And it sits much nicer around my shoulders when I tried it on. 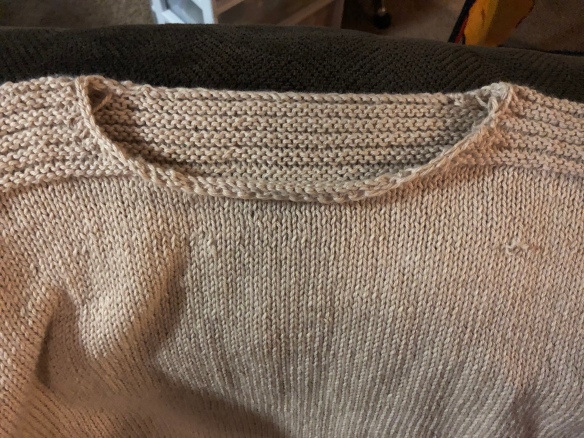 Now on to sleeves! Happy Knitting!!

After putting the kids to bed, doing the dishes and packing lunches I managed to add the last few rows on my Worsted Boxy back panel. From that point it was pretty easy to add the three needle bind offs to get the sweater attached. 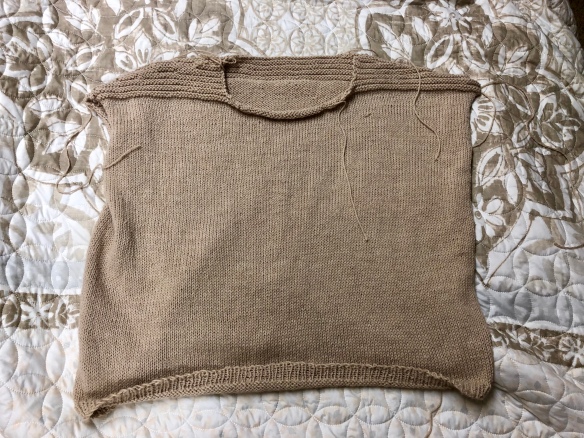 My short rows turned out neater than they felt as I was knitting them. And I was only off two stitches on one shoulder when I was seaming. It didn’t look like it was going to show so I just decreased them away as I was binding off.

I did try this on after I seamed. It is not as long as I maybe want. But I only have one skein of yarn left for the collar and both sleeves. (They won’t take the whole skein for sure.) But if I would have added 2 to 3 more inches I would have been in yarn chicken territory. And I’m pretty sure a good blocking will add some length if done right. 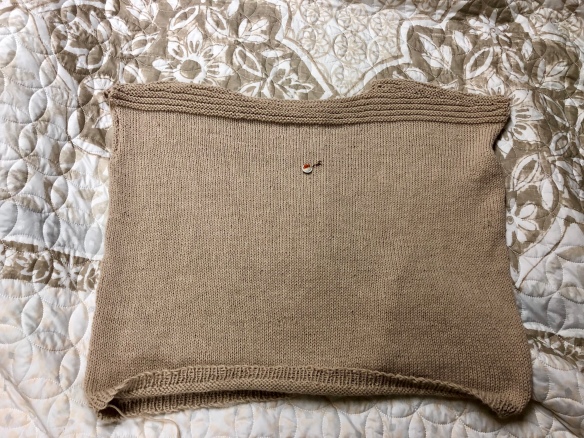 P.S. the bottom hem is STILL flipping up. I literally cannot wait to block this into submission!

I started the back portion of my Worsted Boxy last night. It was the hubby’s night for bath and bed so I pulled a bottle of one of my favorite local Kansas wine makers and went to town on some flat stockinette.

I haven’t looked yet this morning, but I’m pretty sure I did not suffer wine induced knitting oopsies. It was actually a very much needed calm evening. (And I busted out the crazy yoga pants that drive my husband crazy.) As I’m getting older (read more tired) I find that I’m getting better about self care and taking care of my needs just as much as I take care of others. Some days is a struggle but it’s always worth it.

Michele plays with yarn, food, and music in Portland

The Kailyard Knitter
Crafting Out Of Context
rosiejones2015

Making, Baking and Blogging for the first time...

I knit, therefore I rock.