Whelp, my knitting while drinking did end in disaster. I made not one but TWO mistakes in the charts. Sigh.

The first one towards the beginning of the chart wasn’t so bad. Stuff is lining up where it shouldn’t but doesn’t look horrible, just now how the designer planned for. But the wheels REALLY fell off towards the top. That shit just doesn’t eve make sense, sigh.

I got REAL brave and pulled the needles completely out. I used a DPN to catch the first stitch of the round where I wanted to rip back to. And then to the frog pond I went! I have all the stitches back on the needles and nothing ran too badly. Just don’t have the energy restart and redo today.

This is a future Rachelle task! Happy Knitting!!

My Connections Beanie is absolutely cruising along. I am working on reading the chart and not using the written directions. It is taking my brain a minute to click in but I’m getting there.

The main body of this hat is worked on a larger needle than the brim. I actually remembered to switch! I am also being careful to not pull the slipped stitches too hard to keep the overall tension the same.

I am finding that I don’t want to put this project down. ‘Just one more chart row’ has run through my mind many times. I have hopes that this hat will be done quickly….

I have powered through all the 1×1 ribbing and the setup for the main body of the Connections Beanie!

I thought this would be my first time working colorwork….it’s not. I got out the chart and this is just slipped stiches so its more mosaic than anything. Oh well, it will still be pretty! I am working the larger of the Connections Beanie.

I am not super great at reading charts so I am very glad there are really good pattern photos so I can tell if I’m staying on track, lol. Happy Knitting!!

I have decided its time to dip my toe into colorwork. I have avoided it up until now for now good reason other than I wasn’t ready to learn. But I have two skeins of DK from The Shepherd’s Mill that have been calling to me to combine.

I have my pattern printed, needles pulled and I just need to wind the skeins up. The pattern comes with a light and dark version. I plan to cast on the light version first with the hopes that I could squeak out a dark version with the colors reversed? Might be a bold plan for my first colorwork project and expecting that much yardage management, lol.

As promised, here is the second color section of my Arya Shawl. I have found this to be my “reward” knitting of late. It is busy season for this accountant at work so I come home pretty much wiped out. And so in the quiet of the evening I have been reaching for this project to work on. I may only have time for a few rows before I fall asleep but with DK weight yarn it shows the progress quickly. The shawl looks less thong like now. 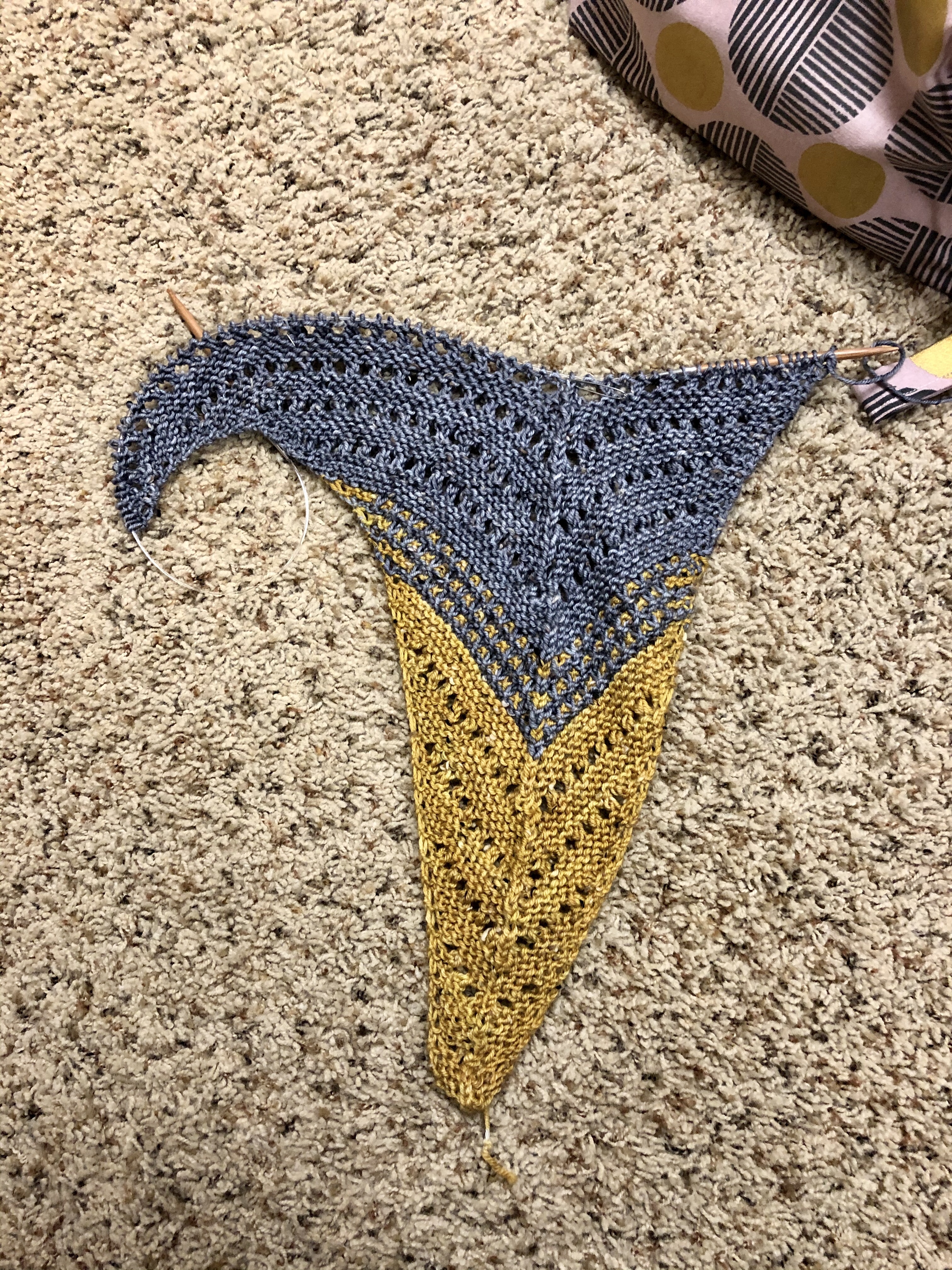 I’m super late the party with the grellow color combination. But I’m really loving the grey and yellow contrast. But with this Chubbs and Squeak yarn also being a tweed yarn there is a consistent element flowing throughout. I’m still not 100% proficient on my CCD or centered double decreases and I have to fudge them sometimes to keep my stitch counts correct. But hey, this is garter stitch so it’s very forgiving!

My favorite of favorite parts so far? The mosaic slipped stitch color work portion that transitions between the two colors. it just makes my heart happy!

The Down Cellar Studio Pigskin Party KAL is here! And on the first day I wanted to get a quick victory and clear out some old stash. I have two skeins of Cascade Ultra Pima in my stash from 2012 that never found the right project. Well, it is in fact once of the approved yarn for Knitted Knockers so both skeins are destined to become boobs!

To make sure I could wrap my head around the construction and get used to the size 8 DPN needles, I made an A cup size first. The first of the pair flew off my needles in one evening! 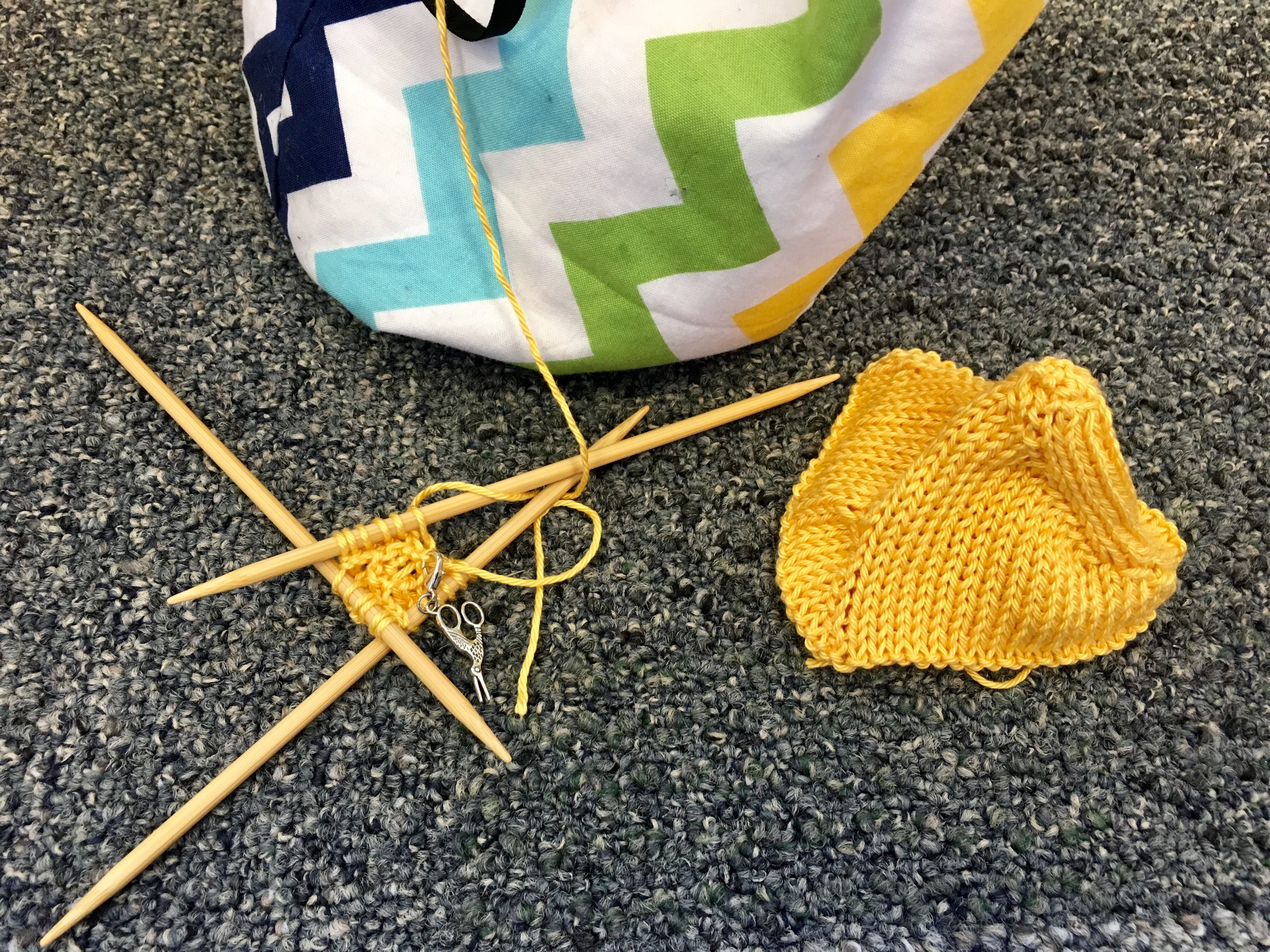 Un-stuffed it looks like a weird pyramid, lol. But other than some slight laddering between the needles I’m quite pleased. I remembered halfway through how I need to tighten the stitches after switching needles to discourage laddering. So the second one will be better. 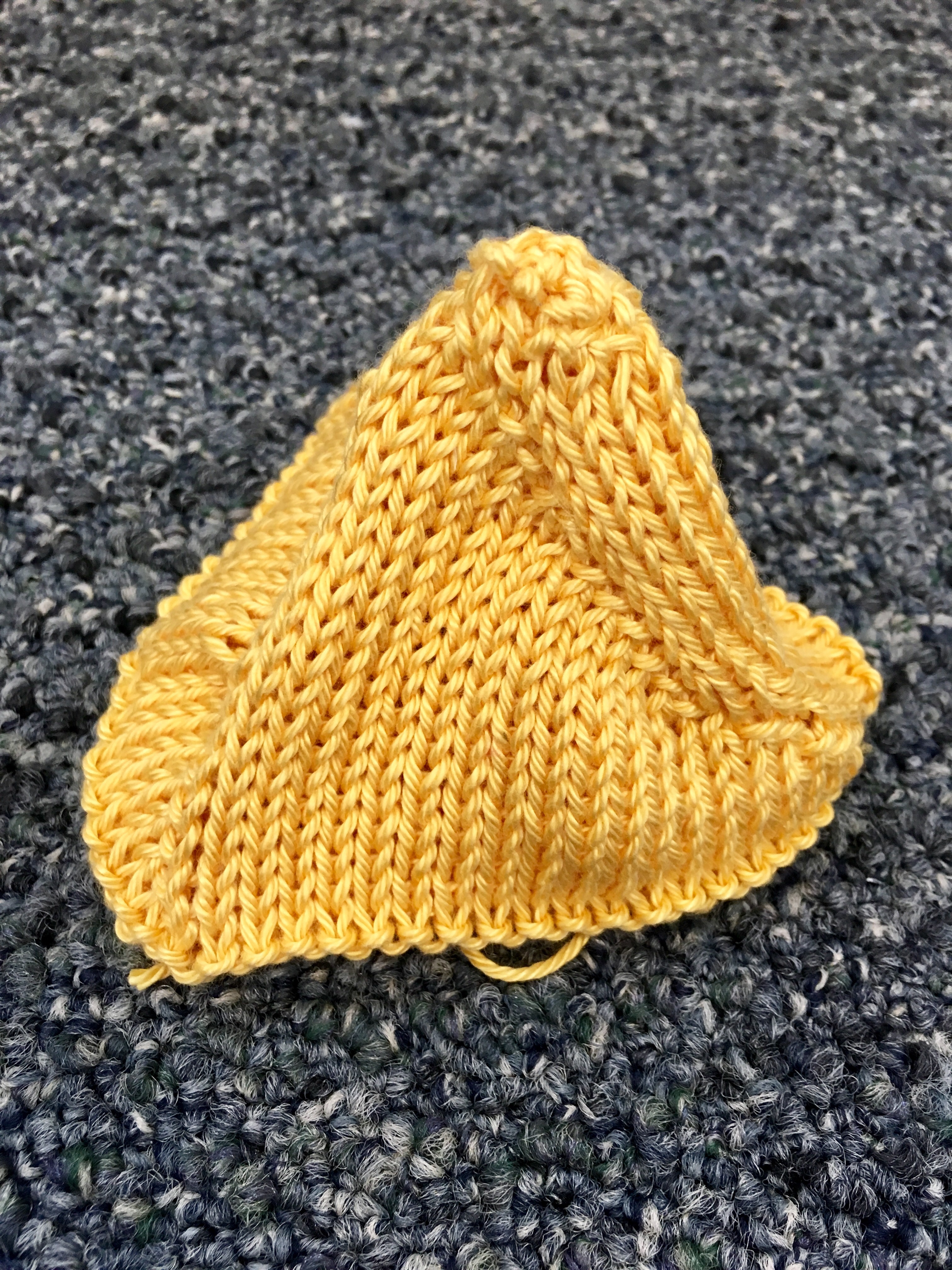 The charity accepts them in this state (un-stuffed). But I want to see what they look like filled so I think I will stuff this pair just to see. My plan is to sprinkle in some knitted knockers among my other KAL projects to get a fast win here an there but also to do some good for women healing from a mastectomy.

Grandma to the rescue! Thanks to her crochet skills Jellybean’s Minion Hat is done!! She sent me the minion eyes… 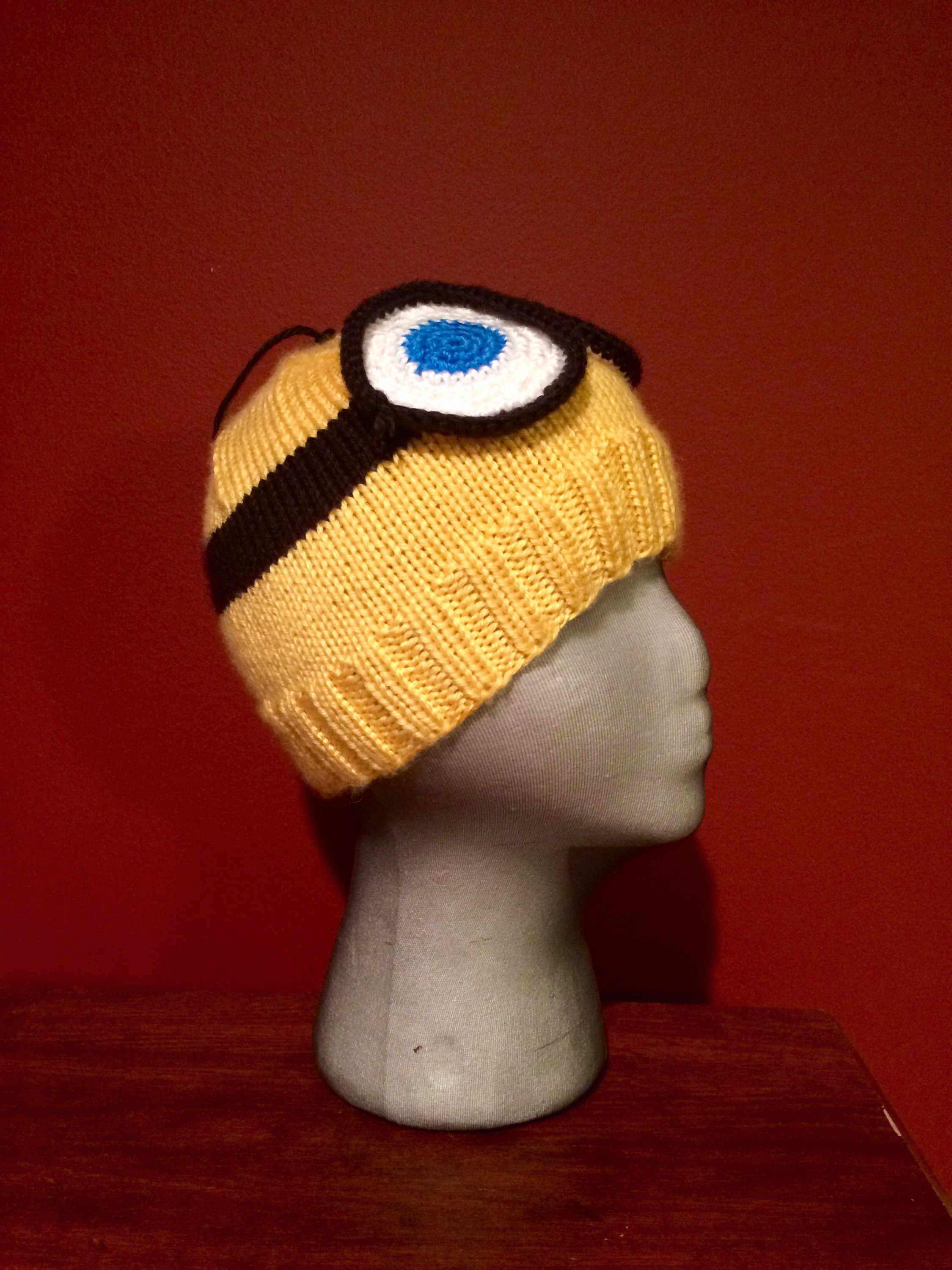 I still need to do some more tacking of the eyes to both secure them for baby hands and make them lay attractively. 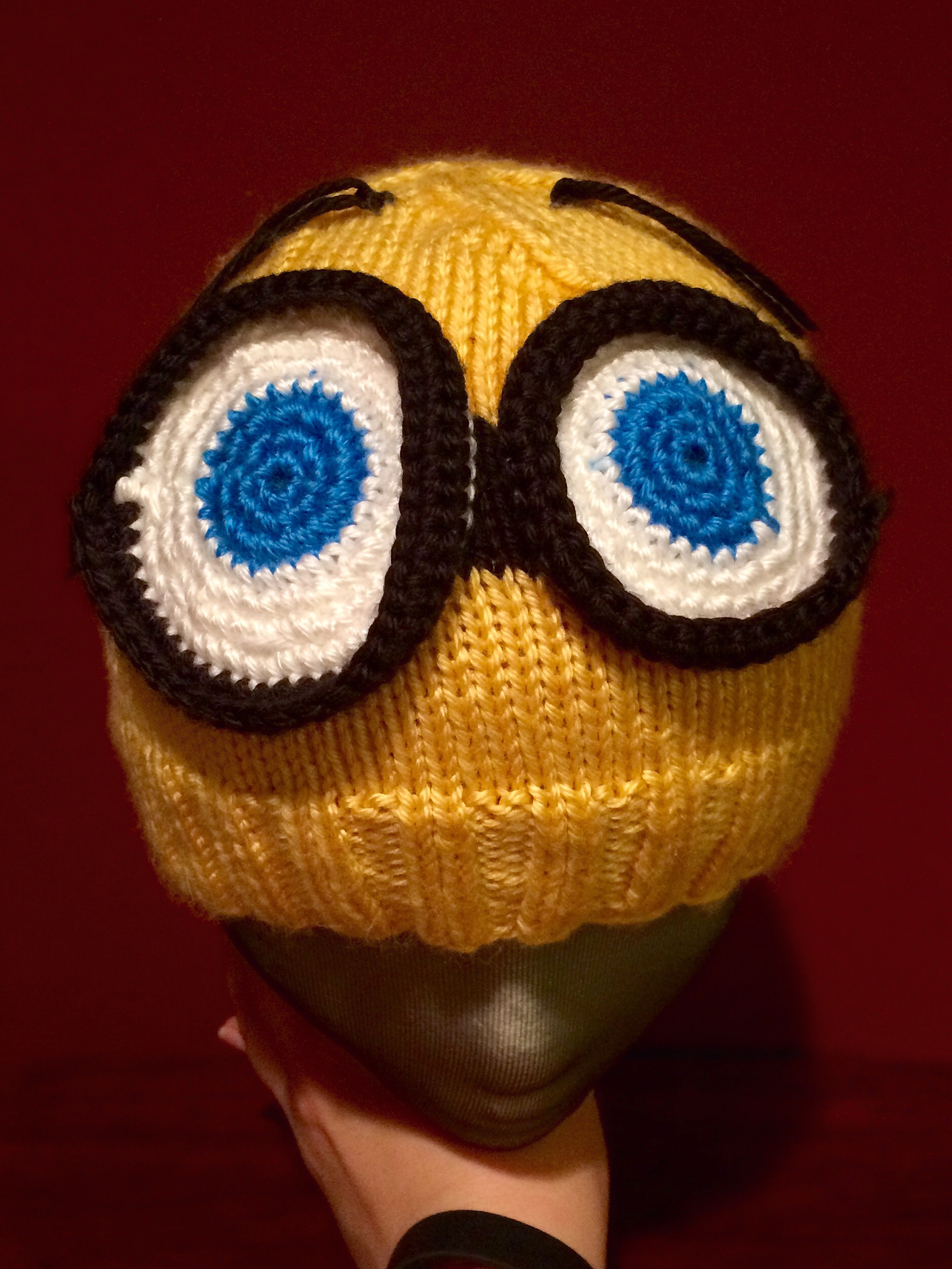 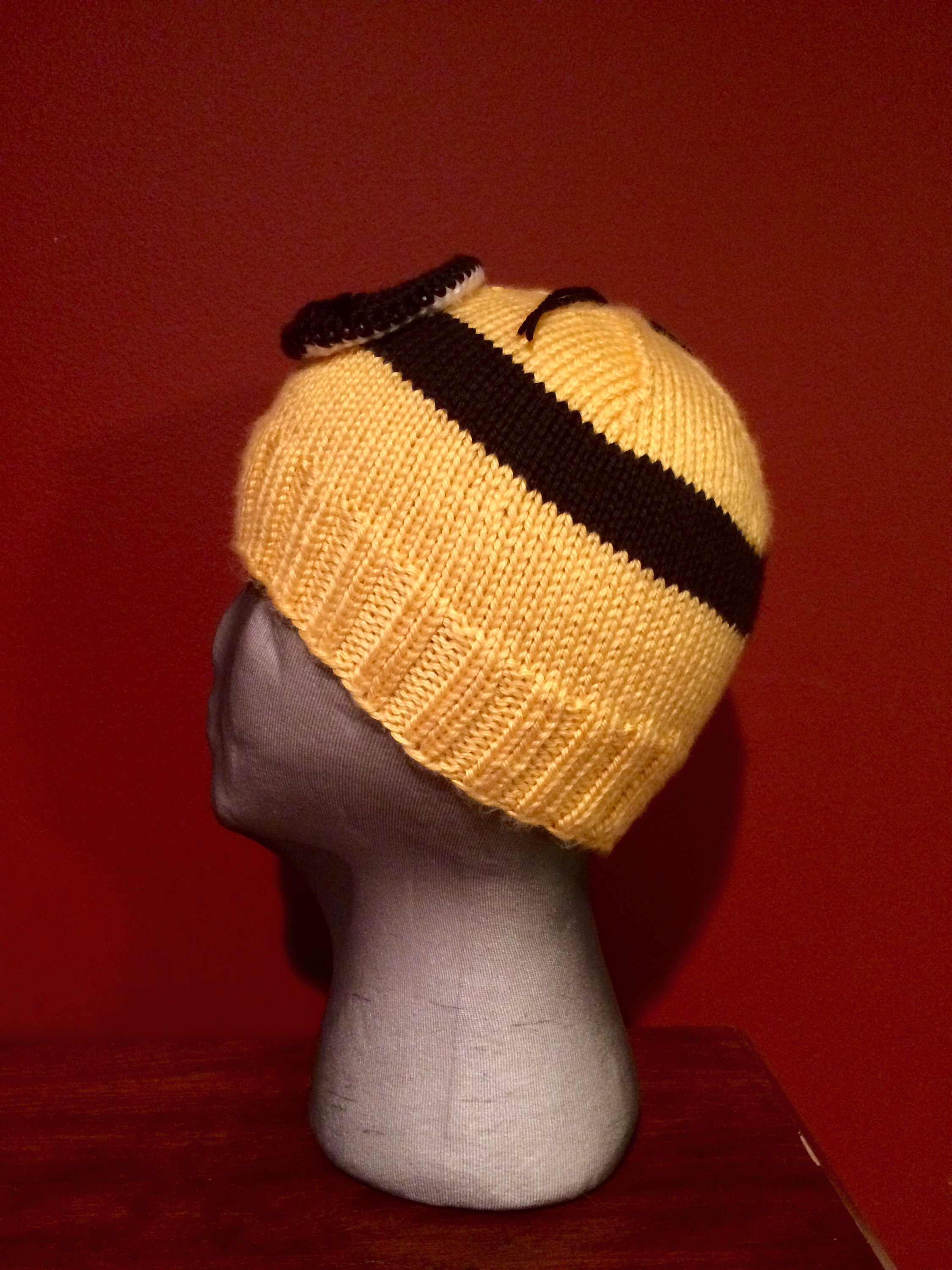 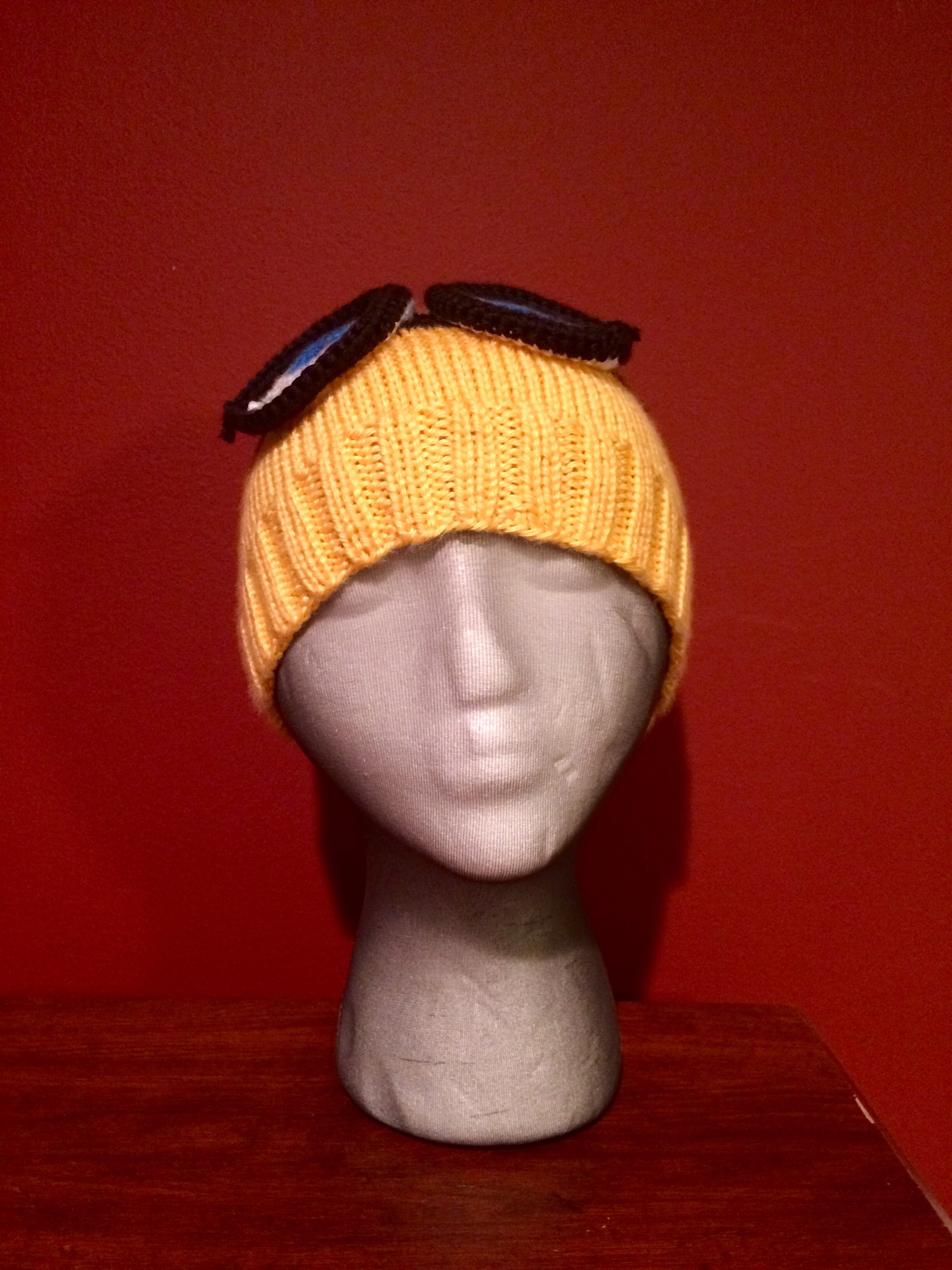 I don’t have the stats on the total yarn used but it was a great stashbuster of leftover bits. It’s Caron Simply Soft in Sunshine, Black, Cobalt Blue, and White. My ravelry page is here.

Now I just need to figure out how to get Jellybean to model this and keep it on his head for more than 30 seconds. I think I have secured the necessary overalls for his Halloween costume but I still need to find a yellow shirt. Not to mention get my but in gear on the Gru scarf! It’s less than two months to Halloween!

Thanks to some 4th of July grandparents time I’ve made some progress on my mini minion hat! 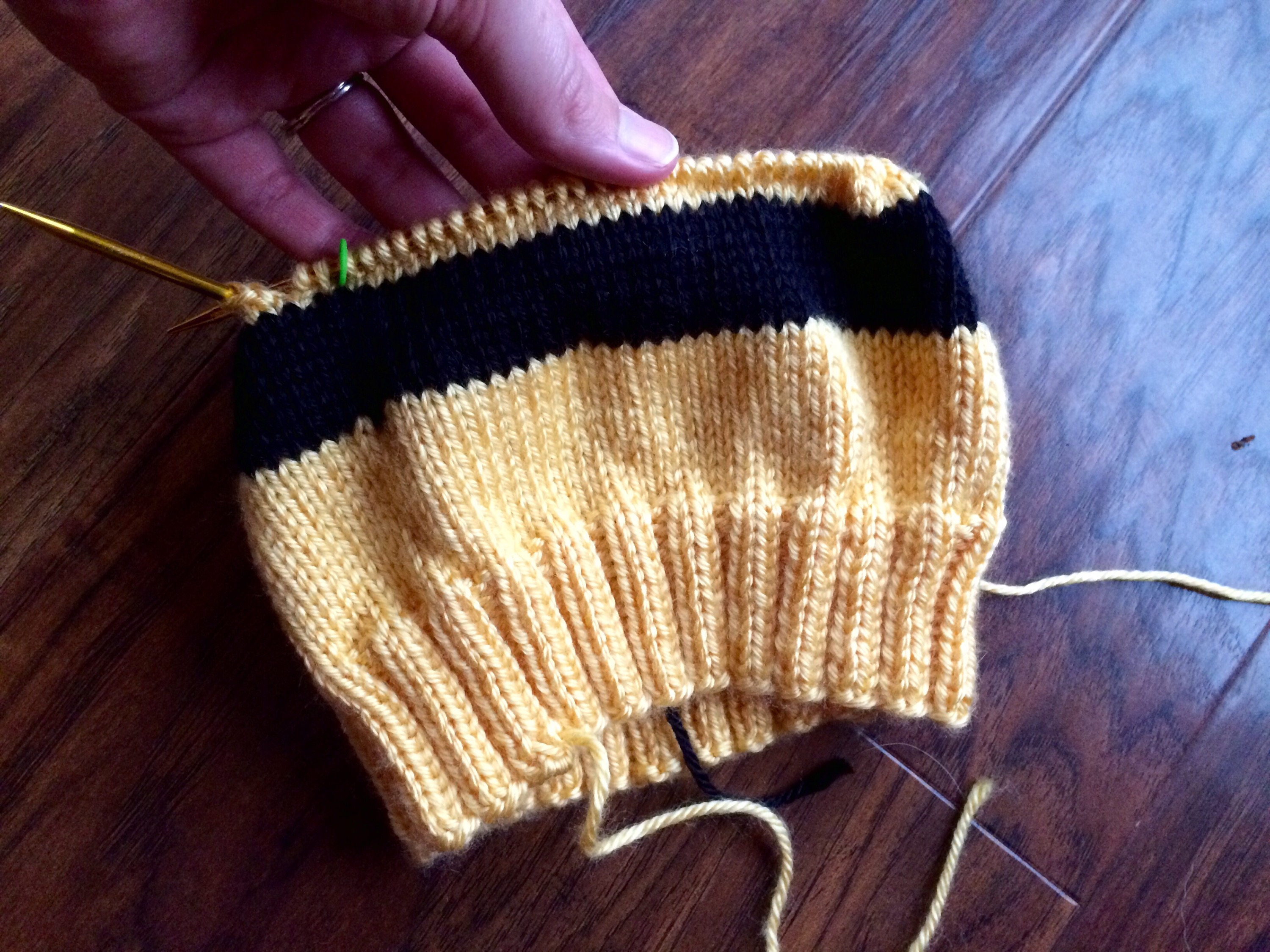 I’ve completed the goggle band and ready to start the crown decreases. Unfortunately I’m out of the sunshine yellow (insert face palm here). I’ve been to two Walmarts and a Joanns so far with no dice. Apparently neon yellow is in and sunshine is out. My last hope is Michaels so fingers crossed!

I also attempted to make eyes for the minion using YouTube tutorials. Let’s just say I need more practice. My mom saw my attempts, giggled and then promised to make them for me. So I left the yarn in her hot little hands!

Happy Friday!! I have a FO to show you 🙂 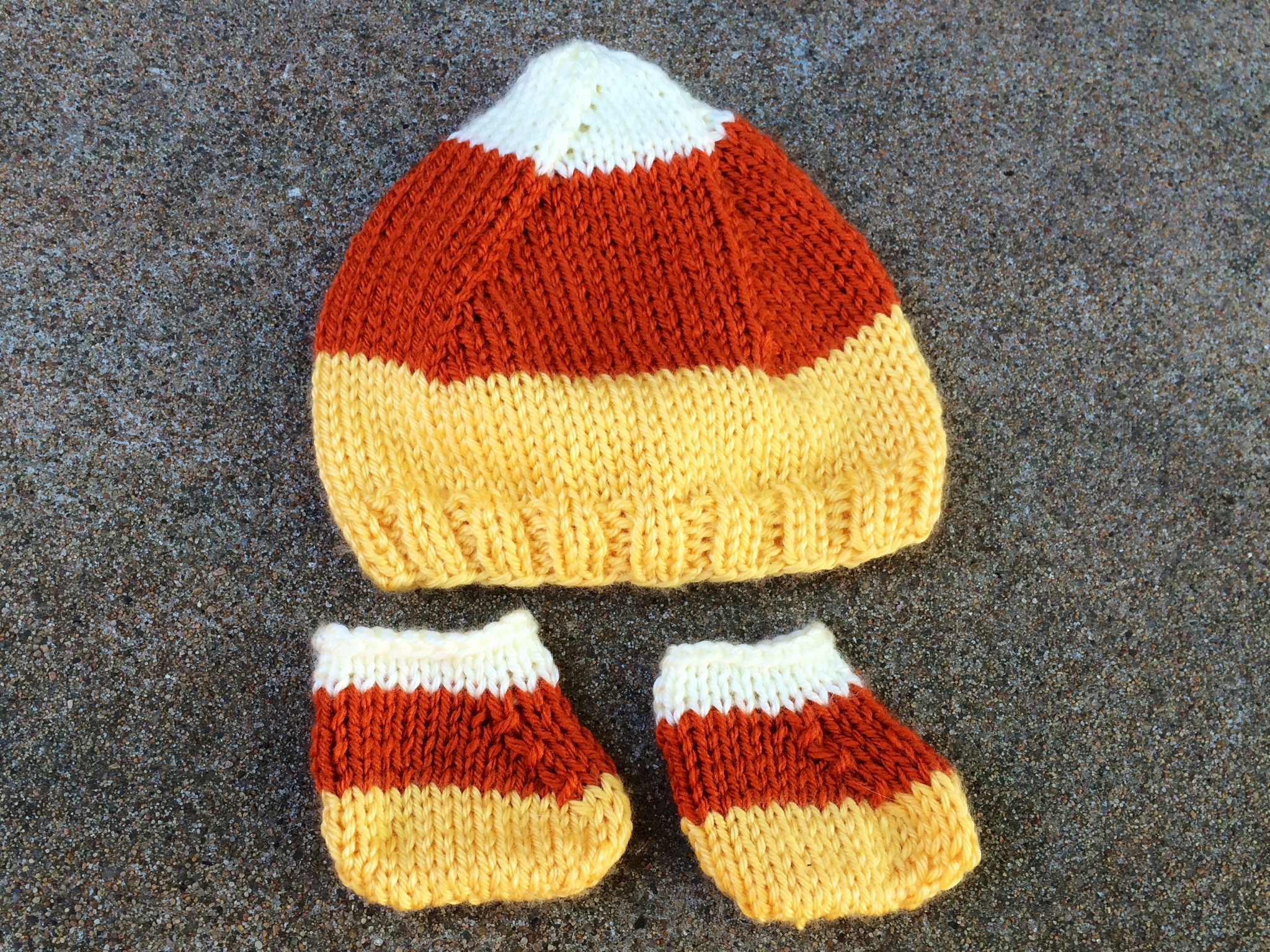 My Candy Corn Hat and Booties are done! This was a crazy fast knit. Including the fact that I basically knit the hat twice. I chose to knit the hat in the round on a circular instead of double pointed needles. This caused an EPIC pattern reading fail that I didn’t notice until I was almost done. But I digress… 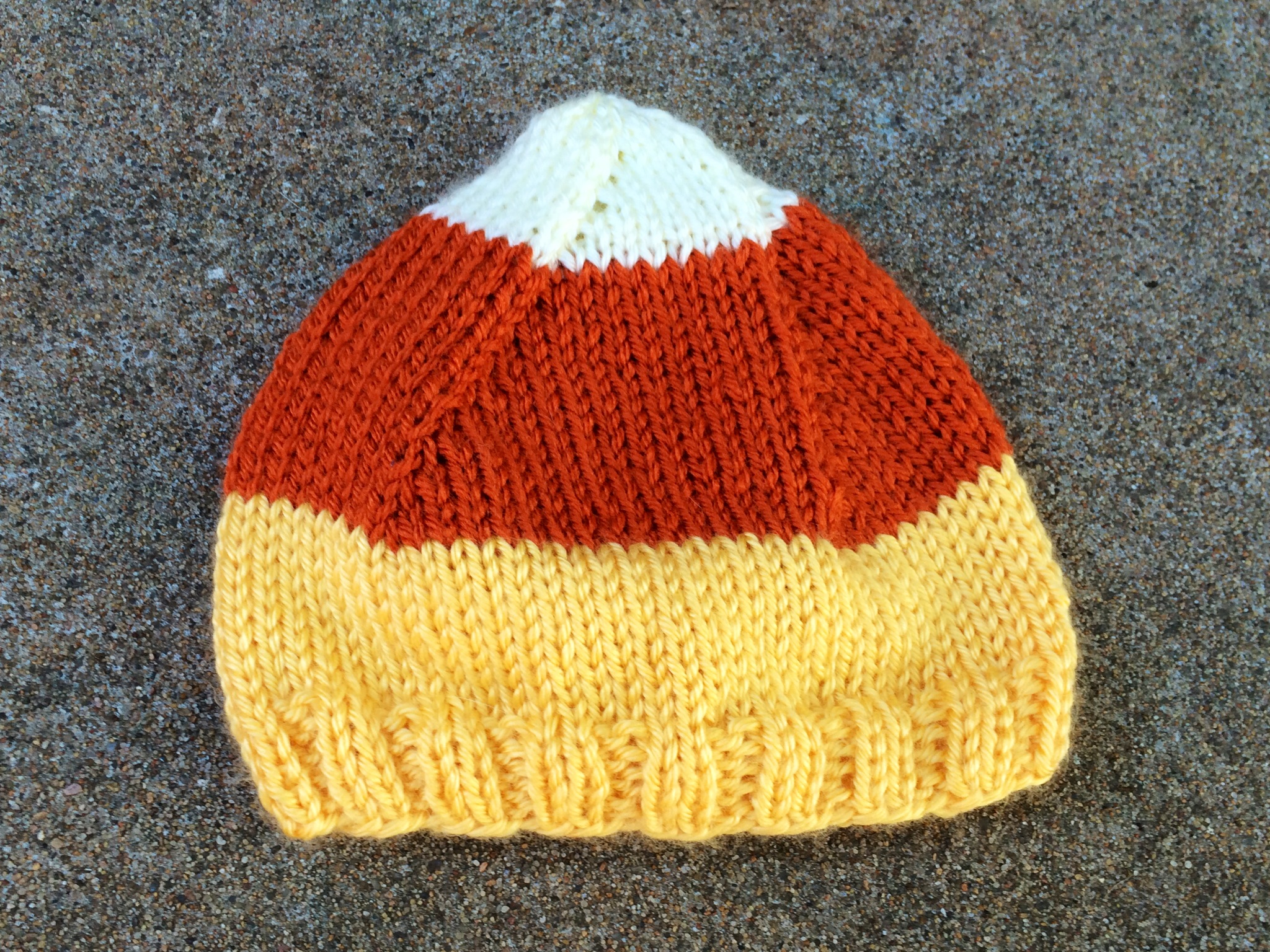 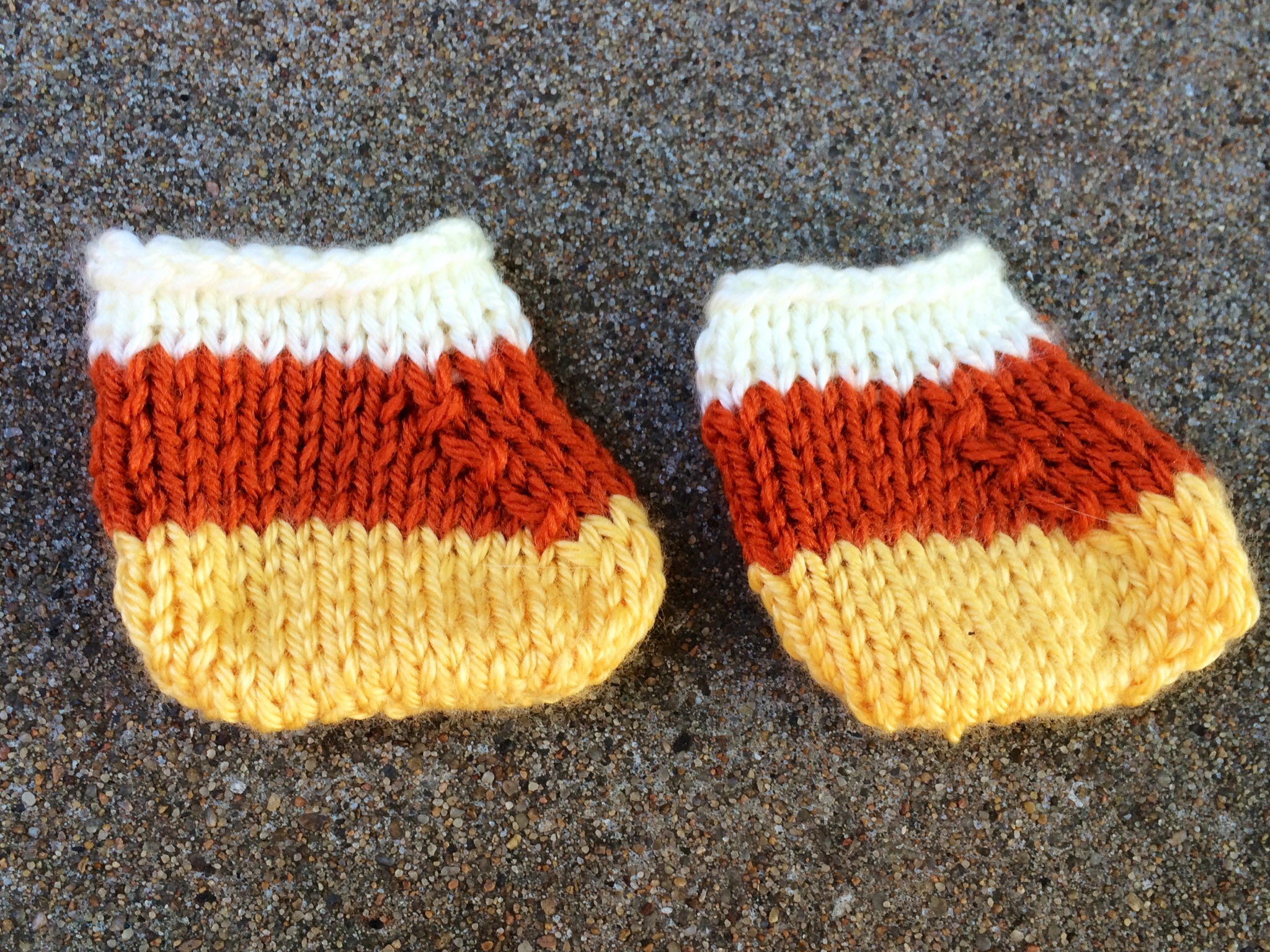 Yarn: Caron Simply Soft in Off-White and Sunshine and Vanna’s Choice in Terracotta. I used very little yarn. All told it was 47 gram or 67.7 yards of yarn. Obviously much more yellow and orange than white. This would great for using up scraps!

Mods: I cast on 68 stitches instead of the pattern prescribed 60 to allow for growing room for Jellybean and the fact that my husband’s family tends to grow big headed babies, lol. My project is Raveled here.

Depending on baby size and weather, this might be Jellybean’s Halloween costume. We will see what the baby brain fog brings. For now I’m just going to continue to knit until he or she gets here!

Happy Labor Day to those in the US!!

This is just a quick post to show you something awesome, my last hexagon for Jellybean’s blanket! Just need a little more decaf and then power through to the end… 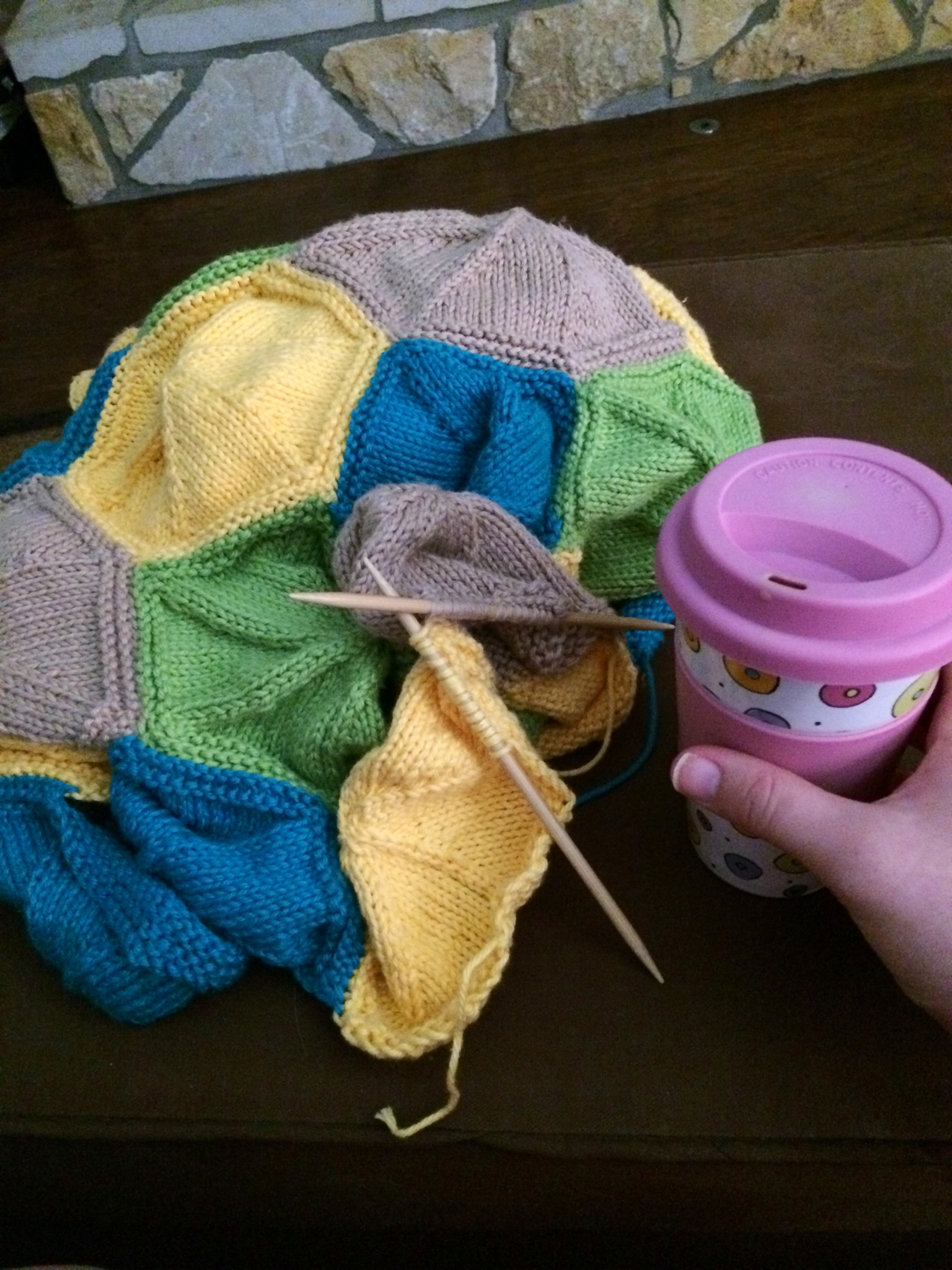 Of course it needs a good bath and blocking to flatten out the hexagons. And I plan on crocheting a simple single crochet border, probably in green? So it’s not done but oh so close!!!

Michele plays with yarn, food, and music in Portland

The Kailyard Knitter
Crafting Out Of Context
rosiejones2015

Making, Baking and Blogging for the first time...

I knit, therefore I rock.